Making of the video: Love is the Master

In an attempt to capture the depth and passion of the piece, I traced the visual source of the set poem Love is the Master and found an amazingly rich illustrated Sufi manuscript dating back to AD 1663 that captures the words of the 13th century Persian mystic Jalalu’ddin Rumi.

I adapted and wrapped the three-dimensional landscape in a photo of the illuminated prologue from Book VI of the Masnavi – the Sufi holy text (courtesy of The Walters Art Museum, of which follows part of the translation capturing the essence of Roxanna’s album Love Abide).

Book VI.
PROLOGUE.
O LIFE of the heart, Husamu-’d-Din,
My zeal burnt within me to write this sixth part!
The Masnavi became a standard through thy influence,
Thy sword (Husam) has made it an exemplar to the world
O spiritual one, I now offer it to thee,
This sixth part of the entire Masnavi.
Enlighten the world’s six sides with its six parts,
That it may illuminate him who is not illuminated!
Love has naught to do with five senses or six sides,
Its only aim is to be attracted to the Beloved!
But haply leave may be given me hereafter
To tell those mysteries so far as they can be told,
In a discourse more closely approximating to the facts
Than these faint indications of those abstruse matters.
Mysteries are not communicable, save to those who know;
Mystery in the ear of infidels is no mystery.
Nevertheless, this is a call to you from God;
It matters not to Him whether ye accept or reject it.
Noah repeated His call for nine hundred years,
But his people only increased in rebellion.
Never did he draw back from admonishing them,
Never did he retire into the cave of silence.
He said, “At the barking and howling of the dogs
No caravan ever turned back in its road.
Nor does the full moon on a bright night cease shining
Because of the howling of dogs on earth.
The moon sheds her light, and the dogs howl;
Every one acts according to his nature.
To each one his office is allotted by the divine decree,
And he acts agreeably to his nature.”
Art thou thirsting for the Ocean of spirituality?
Disport thyself on this island of the Masnavi!
Disport thyself so long as thou seest every moment
Spiritual verities revealed in this Masnavi.

Thanks to The Walters Art Museum for such an amazing visual reference, and for the entire translation.

To enhance the musical climaxes of the piece, I adapted parts of the luscious Indian-style illustrations in the referenced Masnavi giving them a new breath of life and the animation some true depth.

To capture the magic and more quietly mystical part of Roxanna’s piece, I created a nighttime woodland scene in which I could use a Sufi mandala (a revolving circle that could symbolize a Whirling Dervish’s skirt) embossed on a leaf of poetic relevance… unable to find a Turkish or Arabic leaf of ancient tales, I picked a mulberry leaf from Riverside House – a place of emotional and historical relevance for both Roxanna and me. 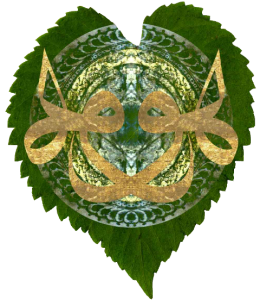 Being from a different cultural background, I appreciate it must be a life-time’s work to understand the practical and mystical nature of all the individual and combined letters of the Arabic alphabet… but the leaf was very much inspired by this particular symbol…

This mirrored Arabic figure (double waw) has been called “the letter of connection between man and God, or fittingly the ear of the Prophet. Caligraphically it reads Hu or Huwa – a name for God in Sufism. Literally, Arabic for ‘He’. 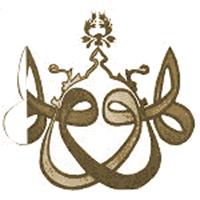 Visiting the Whirling Dervishes of the Mevlevi order added much inspiration, especially fitting with the video and track’s search for the illusive ‘Master’.

“Hu the essential part of the divine name, which automatically accompanies every breath we take.”