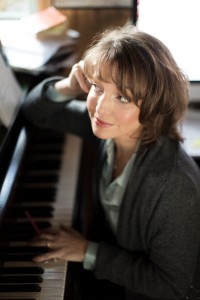 ROXANNA PANUFNIK b.1968 ARAM, GRSM (Hons), LRAM studied composition at the Royal Academy of Music and, since then, has written a wide range of pieces – opera, ballet, music theatre, choral works, orchestral and chamber compositions, and music for film and television – which are performed all over the world. She has a great love of music from a huge variety of cultures and different faiths, whose influence she uses liberally through out her compositions. 2018, Roxanna’s 50th Birthday year, saw some exciting commissions and premieres for the BBC Last Night of the Proms and a co-commissioned oratorio “Faithful Journey – a Mass for Poland” for City of Birmingham Symphony Orchestra and National Radio Symphony Orchestra of Poland, marking Poland’s centenary as an independent state. In 2019, she will have a new commission for two conductors and two choirs, premiered by Marin Alsop and Valentina Peleggi with the Baltimore Symphony Orchestra.

Her works are published by Peter’s Edition Ltd and recorded on many labels including Signum, Warner Classics, Chandos, and EMI Classics. Further details can be found at www.roxannapanufnik.com